MODUS > About us > Company > Certificates and licences

We have concluded the Joint Fulfilment Agreement with EKO-KOM a.s. Co. under our client no. EK-F00020867.

IECEE - CB.CCA
The lighting units produced by MODUS spol. s r.o. are certified according to standards IECEE - CB. The CB system is a certification system of the International Electrotechnical Committee (IEC) for testing the products for electrical safety. Certificate CB confirms conformity of the product's properties to the appropriate standard of IEC. This certificate also includes a protocol from tests, so-called test report.

This is a multilateral agreement among testing institutes about mutual acceptance of tests. Validity of this certificate is unlimited.

Selected MODUS units have assigned CCA mark or CENELEC - Certification Agreement. Validity of this certificate is unlimited. It concerns to the agreement among EU countries about mutual acceptance of results from tests of electrotechnical products. Today, this agreement is available also for testing institutes in countries associated with EU. CCA-marked products must be conform to the appropriate standards and the manufacturing must be conform the requirements contained in the harmonized inspection procedures of CENELEC MC-6 and MC-7. This product can be provided with ESČ mark.

Test of electromagnetic compatibility EMC and electromagnetic resistance are integral parts of both these marks. On the basis of test results, our products meet the so-called ES Declaration of conformity since July 2001, valid for sale of our products in EU countries. For these countries, no CD or CCA certificate is needed. 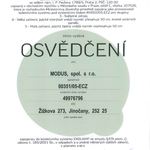 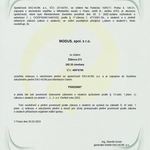